TEHRAN, Aug 03 - U.S. President Donald Trump has imposed another round of sanctions on Russia over the poisoning of a former spy in Britain, the White House said on Friday, a move Moscow said would hurt already strained U.S.-Russia ties. 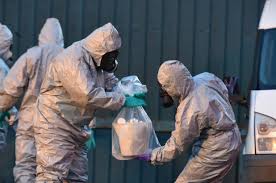 Washington imposed an initial batch of sanctions last year on Russia after determining that Moscow had used a nerve agent against a former Russian double agent, Sergei Skripal, and his daughter Yulia, in Britain, which Moscow denies.

“After the first round of sanctions in response to Russia’s assassination attempt against a private citizen in the UK, Russia did not provide the assurances required under U.S. law,” said White House spokesman Hogan Gidley.

“So we are imposing a second round of sanctions. It’s another instance where we’re proving tougher on Russia than previous administrations.”

Skripal, a former colonel in Russia’s GRU military intelligence service, and his daughter were found slumped on a bench in the southern English city of Salisbury in March last year after Novichok nerve agent was smeared on his front door.