TEHRAN, Aug 03 - Scientists have discovered a new kind of graphene material, which researchers estimate could be used to build superconductors that work at room temperature. 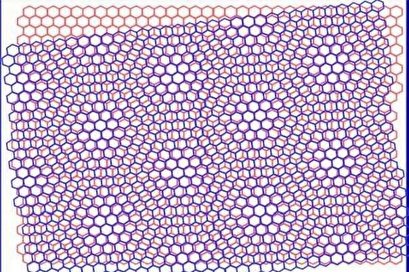 Graphene is a strong, durable and highly conductive material composed of 2D sheets of carbon atoms. In each graphene sheet, the carbon atoms form a hexagonal lattice, or honeycomb-like, pattern. Moiré patterns are the interference patterns produced when two layers with mesh-like patterns -- a combination of opaque and transparent elements -- are overlaid, with one layer slightly turned or twisted.

When researchers made a moiré pattern with graphene sheets, the electrons organized themselves into rows. Scientists suggest the graphene discovery could pave the way for superconductors and other quantum materials.

Superconductors allow electrons to flow without any resistance. But most materials exhibit superconductive qualities at only extremely cold temperatures. If scientists can find a way to build superconductors that work at room temperature, they could dramatically boost the speed and efficiency of modern electronics.

"Our findings provide an essential clue to the mystery connecting a form of graphene, called twisted bilayer graphene, to superconductors that could work at room temperature," researcher Eva Y. Andrei, a professor of physics at Rutgers University, said in a news release.

Moiré patterns can be changed simply by changing the angle of the twisted pattern. In the lab, scientists experimented with the twist of layered graphene, producing different patterns and measuring their effects on the material electronic properties.

Researchers discovered that at a twist angle of 1.1 degrees, the electrons that typically speed past one another come to a complete halt. As they slow down, they begin interacting with one another and coordinating their movements. Their behavior resembles soldiers in formation, marching lock-step. The changes enabled the twisted bilayer graphene to take on new superconductive and magnetic properties.

"Our team found a close resemblance between this feature and similar observations in high-temperature superconductors, providing new evidence of the deep link underlying these systems and opening the way to unraveling their enduring mystery," Andrei said.