TEHRAN, Jul 7 - At least 31 Syrian government troops and allied fighters have lost their lives in an explosion at a military airport in Syria’s central province of Homs, a UK-based monitoring group says. 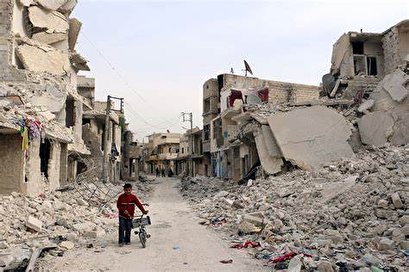 TEHRAN, Young Journalists Club (YJC) - The so-called Syrian Observatory for Human Rights reported on Saturday that the blast occurred at the Shayrat airfield southeast of Homs earlier in the day.
It added that the cause of the explosion had not yet been determined, without giving the number of possible wounded and the extent of material damage it inflicted on the airport.
In a separate report, Syria's official news agency SANA reported that “several” people had been killed in the blast without specifying the exact number of the casualties.
However, it said that a “technical fault during the transport of expired ammunition” had caused the deadly incident.
Back in April 2017, a suspected sarin gas attack hit the town of Khan Shaykhun in the northwestern Syrian province of Idlib, killing more than 80 people.
The Western countries rushed to blame the incident on Damascus, with the US launching some 60 Tomahawk missiles were fires from its warships deployed to the Mediterranean at the Shayrat airfield, in an assault slammed by Syria as an “act of aggression.”
This is while the Syrian government turned over its entire chemical stockpile under a deal negotiated by Russia and the US in 2013. The Organization for the Prohibition of Chemical Weapons has overseen operations to remove the government chemical arsenal from Syria.
Syria has been gripped by foreign-backed militancy since March 2011. The Syrian government says the Israeli regime and its Western and regional allies are aiding Takfiri terrorist groups that are wreaking havoc in the country.
In recent months, foreign-backed terrorists have been suffering heavy defeats in battles against Syrian government forces, backed by the Russian air force and Iranian military advisers.