TEHRAN, August 4 - US Democratic presidential hopefuls have blamed the recent deadly mass shootings in the states of Texas an Ohio on President Donald Trump’s racism and his reluctance to tackle gun violence by introducing new regulations. 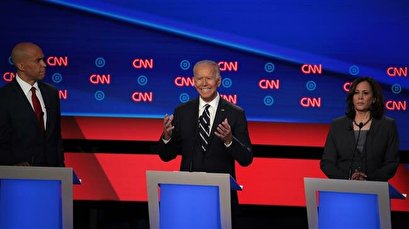 TEHRAN, Young Journalists Club (YJC) - The US witnessed one of its deadliest weekends on Saturday after two gunmen killed 29 people in the space of 24 hours.
Former Texas congressman Beto O’Rourke said the US president was partially responsible for the Texas attack which killed at least 20 people.
“He is a racist, and he stokes racism in this country,” he argued. “It does not just offend our sensibilities; it fundamentally changes the character of this country and it leads to violence.”
In the second shooting, a gunman shot and killed nine people and wounded 16 others at an arts and entertainment district in downtown Dayton, Ohio.
Senator Cory Booker said Trump fueled racist sentiments by using words like “infestation” and “invasion” in describing crime and illegal immigration,  accusing the Republican president of giving license to violent behavior.
“One of the lessons in my faith is that you reap what you sow,” the New Jersey senator added. “He’s responsible.”
Vermont Senator Bernie Sanders also took a swipe at Trump while also urging as he all Americans to come together and reject the kind of “dangerous and growing culture of bigotry” that Trump and his allies promoted, including his immigration policies which involved incarcerating children.
“Instead of wasting money putting children in cages, we must seriously address the scourge of violent bigotry and domestic terrorism,” the lawmaker added. “We must treat this violent racism like the security threat that it is.”
Sanders echoed calls by many other politicians and activists for strict gun safety laws that could prevent the kind of the shooting that took place at the Walmart store in El Paso on Saturday, accusing the National rifle Association (NRA), which is a firm Trump supporter, of intimidating lawmakers into voting down gun control bills.
“After every tragedy the Senate, intimidated by the NRA’s power, does nothing,” he said. “This must change. We need a president and congress that listen to Americans, not the ideology of a right-wing extremist organization. We must pass common sense gun safety legislation.”
California senator Kamala Harris said Trump should “have the courage” to take action. She also called on her colleagues in Congress to come up with “reasonable gun safety laws.”
Former vice president Joe Biden, one of the favorites to win nomination, said in a tweet: “How many lives must be cut short? How many communities must be torn apart? It’s past time we take action and end our gun violence epidemic.”
Massachusetts Senator Elizabeth Warren said: “Americans shouldn’t have to live in fear that if they go to Walmart, or a festival, or school, or just walk down the street that they won’t make it home alive. This has to stop.”
Gun control advocate Gabrielle Giffords, a former congresswoman who survived an attempted assassination by a gunman, urged the president and Republican Senate leader Mitch McConnell to call the Senate back from recess “immediately.”
Trump has condemned the Texas shooting as a “hateful act,”saying it “was not only tragic, it was an act of cowardice.”
“There are no reasons or excuses that will ever justify killing innocent people,” he wrote in a tweet.
The Republicans head of state has come under fire for calling immigrants “animals” and describing the city of Baltimore, Maryland as a “rodent infested mess.”
He also stirred a lot of controversy last month by telling four congresswoman of color, who were among his firm critics, to “go back and help fix the totally broken and crime infested places from which they came.”
Source: Press TV