TEHRAN, August 6 -Only two female northern white rhinoceroses are left, prompting Merck -- a science and technology company working with the BioRescue Project -- to offer assisted reproductive technologies to save the species from extinction. 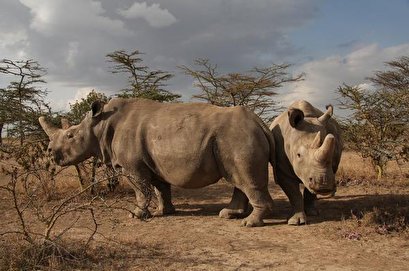 TEHRAN, Young Journalists Club (YJC) -The rhinos -- mother and daughter are named Najin, 40, and Fatu, 19 -- are being kept in the Ol Pejeta Conservancy in Kenya. The last male species, Sudan, who was the father and grandfather, died in 2018.

"With the northern white rhino species dangerously on the verge of extinction, we consider it our responsibility, as industry leaders in the assisted reproductive technologies for the last 60 years, to offer our help through innovative medical technologies before it's too late," said Marie-Andrée Gamache, managing director at Merck.

The BioRescue Project received funding of $4.4 million from the German Federal Ministry of Education and Research, which is led by Professor Thomas Hildebrandt from the Leibniz Institute for Zoo and Wildlife Research.

It consists of a global team of scientists and conservationists from Germany, Italy, the Czech Republic, Japan and the United States.

Najin and Fatu are too old and physically unable to carry a pregnancy to term, therefore, their egg cells will be harvested for later use in an IVF procedure with the permission of the Kenyan government.

Sudan's semen was harvested before he died and is stored at minus 196 degrees Celsius in equipment supplied by Merck at the Leibniz Institute.

The embryo obtained will then be transferred into the uterus of a southern white rhinoceros via embryo transfer and carried to term by the surrogate mother.

"The desired outcome will be a self-sustaining, genetically healthy population of northern white rhinoceroses that can survive in the wild. Due to the small number of eggs and sperm available, the stem cell approach is important in order to increase the genetic variability of the population," said Richard Vigne, managing director of the Ol Pejeta Conservancy.

The BioRescue project will also consider the ethical issues that could arise following an approach of this type.

These issues will be openly addressed by the consortium, through the promotion of public debate to identify the right answers to the ethical responsibilities of scientists, governments and citizens regarding biodiversity conservation activities.

Saving the northern white rhino is the first such project to use IVF, in vitro fertilization -- a process of fertilization in which an egg is combined with sperm outside the body -- to save a species from extinction.

After the project, Merck said it will explore whether the technology can be used to help save any other endangered species.