TEHRAN, August 6 -The mayor of Hiroshima has renewed a call for the Japanese government to join the United Nations (UN) nuclear weapon ban treaty, as the city marks the anniversary of the United States’ atomic bombing more than seven decades ago. 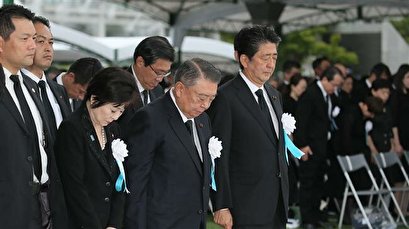 TEHRAN, Young Journalists Club (YJC) -Mayor Kazumi Matsui used the ceremony at the Peace Memorial Park on the 74th anniversary of the Hiroshima bombing on Tuesday to call on Prime Minster Shinzo Abe to sign the Treaty on the Prohibition of Nuclear Weapons (TPNW).

The treaty has been approved by more than 120 nations but is rejected by the US and other nuclear-armed countries.

“I call on the government of the only country to experience a nuclear weapon in war to accede to the hibakusha (atomic bomb victims)’s request that the TPNW be signed and ratified,” said Matsui. “I urge Japan’s leaders to manifest the pacifism of the Japanese constitution by displaying leadership in taking the next step toward a world free from nuclear weapons.”

Prime Minister Abe was in attendance of the ceremony.

The mayor also raised concerns about the rise of self-centered politics in the world and urged leaders to steadily work toward achieving the goal of a world without atomic weapons.

Abe did not mention the UN treaty in his own speech.

On August 6, 1945, the American B-29 bomber Enola Gay dropped its atomic payload over the Japanese port city, ultimately killing 140,000 people.

The bombing utterly destroyed almost everything within 10 square kilometers in the downtown area.

Many died immediately while others succumbed to their injuries or radiation-related illnesses weeks, months, and years later.

Three days later, a second US nuclear attack on Nagasaki killed another 70,000 people.

The mayor of Hiroshima had made the same request for signing the treaty at the anniversary of the bombing last year.

The anniversary ceremony this year was held just days after the US formally terminated a Cold War-era treaty with Russia that had banned nuclear-capable missiles with ranges of 500-5,500 kilometers.

Japan, now one of the US’s closest allies in Asia, hosts 50,000 American troops and is protected by America’s so-called nuclear umbrella.