TEHRAN, August 9 - Muslims gathered from around the globe in the holy city of Mecca in Saudi Arabia have begun this year’s Hajj pilgrimage. 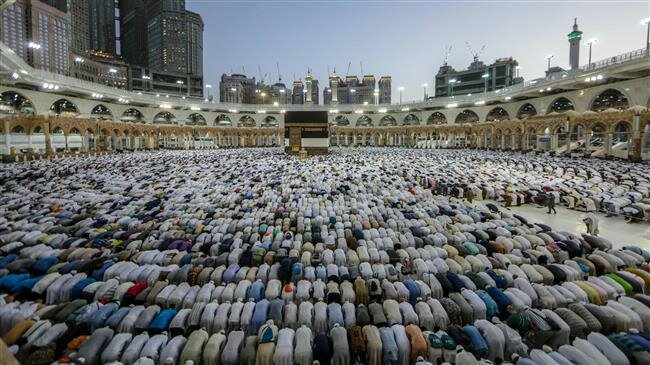 TEHRAN, Young Journalists Club (YJC) - According to local media, about 2.5 million believers are participating in the annual Hajj pilgrimage, which started on Friday.

Each and every able-bodied Muslim, male or female, is required to complete the religious trip at least once in their lifetime if they also have the sufficient financial capacity to do so.

The nearly month-long pilgrimage features various rites, including stoning a column representing the devil, sacrificing sheep in remembrance of Prophet Abraham’s offered sacrifice, and Tawaf, which consists of walking and praying around the Kaaba, Islam's holiest shrine, at the Grand Mosque in Mecca.

"It's an indescribable feeling. You have to live it to understand it," said an Algerian pilgrim describing his first time taking part in the spiritual trip.

"It's a golden opportunity and moment," said his female companion.

The gathering is also seen as a symbol of Muslim unity, with all participants required to wear a simple and identical outfit during the processions.

The clothing consists of a two-piece white seamless garment for men, and a loose cover-all dress for women.

Muslim scholars have pointed that the simple attire, along with other aspects of the pilgrimage, are meant to express unity and the humility of the Muslim Ummah — the Muslim people as a whole — towards God.

The pilgrimage ends with the start of Eid al-Adha, also known as the "Festival of Sacrifice".

This year's Hajj takes place as the country is mired in a number of conflicts with its neighbors and faces the prospect of popular expressions of discontent.

The kingdom's push to normalize relations with Israel and further isolate the Palestinian cause in taking part in the US-backed so-called "deal of the century" has been specifically met with anger in many Muslim countries.

Saudi officials have consequently warned pilgrims to avoid any political topics during the pilgrimage, despite the belief held by many Islamic scholars that the Hajj is in fact intended to be an opportunity for Muslims to discuss social and political issues affecting the Ummah.

"Leave all other matters in your countries to discuss," said Mecca Governor Prince Khalid al-Faisal earlier this week.

Riyadh has also faced strong criticism for its mismanagement of the Hajj specifically after thousands of pilgrims died in a tragic human crush incident in 2015.

Saudi authorities gave an initial tally of 770 deaths and then stopped updating that figure, even as official counts from individual countries whose nationals had died in the incident rose to more than a total of 2,400 individuals, reaching nearly 5,000 deaths according to some reports.

At least 464 Iranians lost their lives in the incident.