No deal announced as US, Taliban wrap up latest talks

TEHRAN, August 12 -The latest round of talks between the Taliban and the United States ended early Monday without any sign a peace deal had been reached for Afghanistan, as both sides said they would consult with their leaderships on the next steps. 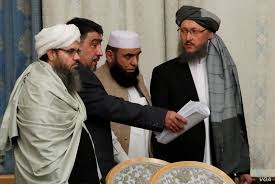 TEHRAN, Young Journalists Club (YJC) - A Taliban spokesman had said last week that this eighth round of talks would conclude with a deal to end the nearly 18-year war, America's longest.

The two sides have been discussing an agreement under which U.S. forces would withdraw from Afghanistan and the Taliban would guarantee the country would not revert to being a launch pad for global terrorist attacks.

U.S. envoy Zalmay Khalilzad said the talks that began on Aug. 3 in the (Persian) Gulf nation of Qatar were "productive" and that he was heading to Washington for consultations.

Taliban spokesman Zabihullah Mujahid called the discussions "long and useful." Neither provided details on their outcome.