TEHRAN, August 14 - Donald Trump warned that China was moving troops to the Hong Kong border as protesters clashed with riot police at the city's international airport for a second time on Tuesday night. 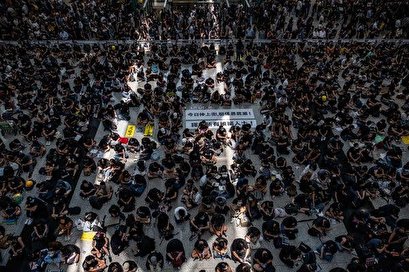 One of the men was bound with cable ties and appeared semi-conscious as protesters displayed his belongings on the floor. Hu Xijin, editor-in-chief of the Global Times, said the man was a reporter for the Communist Party mouthpiece newspaper.

Trouble began as a number of regular police officers entered the airport without riot gear to assist paramedics after one of the men collapsed. Protesters drove the police out of the terminal building and shortly afterwards around 50 riot police arrived.

In one flashpoint, protesters cornered a police officer and started beating him with his own baton. The officer had been trying to arrest a pro-democracy protester, but was beaten back by the crowd. As he was shoved to the floor, he drew his gun. The protesters immediately leapt back.

Had he fired, the consequences for Hong Kong and its young army of activists could have been dire. But the officer held his nerve and colleagues came to his aid.