TEHRAN, August 14 - Astronomers studying Fast Radio Bursts (FRBs), some of the rarest and most enigmatic phenomena in deep space, have detected eight new repeating signals, which could hold the key to solving where exactly they come from. 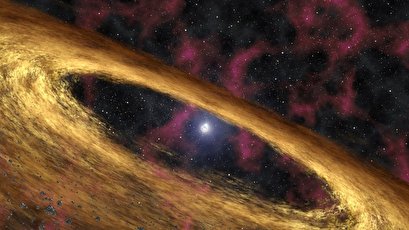 TEHRAN, Young Journalists Club (YJC) -While these curious signals are alien in origin, no one should be expecting little green men contacting their friends in Area 51 about the allegedly impending September raid. We currently don’t know what these bursts are or what causes them, though some suspect they may be the death rattles of neutron stars or young magnetars, extremely dense star cores spinning in a magnetic field.

The eight new repeating FRBs detected by the Canadian Hydrogen Intensity Mapping Experiment (CHIME) radio telescope now bring the total number of known repeating FRBs to 10. These perplexing, ‘alien’ signals have captured humanity’s attention for over a decade, as the world’s best and brightest try to figure out both what they are and what causes them.

The majority of FRBs are only detected once and then they disappear, but a select few are repeaters which may provide unprecedented insights into the composition of our universe.

These brief, immensely powerful but short-lived bursts (often lasting just milliseconds) typically release the energy of 500 million suns, so naturally they have captured astrophysicists’ attention the world over.

In January 2019, just one, FRB 121102, was known to flash repeatedly, though a second, FRB 180814, was discovered weeks later. In just a few short months, humanity has increased that number five-fold.

Scientists have also localized the eight new repeaters to known galaxies, determining their rough location by how dispersed the signal is. Researchers have also discovered that not all FRBs come from extreme gravity environments, which means that there could be several different classes of objects or events that create FRBs.

Furthermore, repeater flashes last longer than one-off bursts indicating there may be two distinct underlying mechanisms that create them. Repeat bursts get weaker and less frequent in what the researchers dub the ‘sad trombone’ effect.