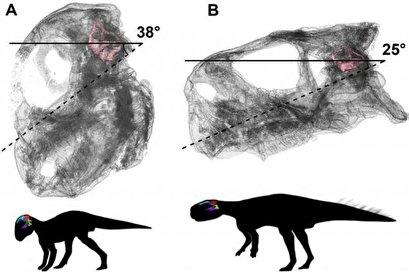 TEHRAN, Young Journalists Club (YJC) -Psittacosaurus was a genus of extinct dinosaur living in Asia between 126 and 101 million years ago. Over the decades, hundreds of specimens have been recovered. The genus was part of the group of dinosaurs known as Ceratopsia, the group to which the genus Triceratops belonged.

Psittacosaurus was a beaked plant-eater, and the dinsoaur birthed tiny, hamster-sized babies. As adults, Psittacosaurus dinosaurs reached lengths of 6.5 feet.

To better understand the effect of this maturation process on the dinosaur's brain, scientists used 3D models to animate the changing shape of the it's braincase.

The new survey revealed that, as the baby dinosaurs developed, their brains changed shape and location, shifting from the back of the small, rounded head, to the front. As the dinosaurs grew, their heads and brains stretched out and became more elongated, extending under the skull roof in the adults.

Analysis of the changing brain position also revealed a change in the developing dinosaur's locomotion. The evidence suggests Psittacosaurus babies spent their earliest years on all fours, but by the age of two or three, they assumed a bipedal posture.

The braincases of adolescent Psittacosaurus dinosaurs showed the maturing dinos were pointing their heads forward, not downward. In other words, by the time they were a few years old, they were standing up.

"This posture shift during growth from quadruped to biped is unusual for dinosaurs, or indeed any animal," said Michael Ryan, a scientist at Carleton University in Canada. "Among dinosaurs, it's more usual to go the other way, to start out as a bipedal baby, and then go down on all fours as you get really huge."

The findings -- published this week in the journal PeerJ -- suggest Psittacosaurus babies were fairly vulnerable. Being on all fours allowed the dinosaurs to keep out of site under brush. As the dinosaurs got older and bigger, bipedalism allowed them to run faster and escape large predators.