Foreigners have to leave Mideast, Zarif says in Kuwait

TEHRAN, August 18 -Iranian Foreign Minister Mohammad Javad Zarif has highlighted bilateral ties between Iran and Kuwait, saying in a meeting with the Persian Gulf country’s crown prince that “foreigners” have no place in the region and have to leave. 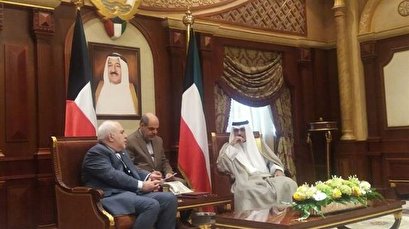 TEHRAN, Young Journalists Club (YJC) -Zarif, who received a warm welcome from Kuwait’s Crown Prince Sheikh Nawaf al-Ahmad al-Jaber al-Sabah on Sunday, expressed Iran’s preparedness for expansion of ties and dialogue between the two countries, saying it will serve the interests of the region and its stability and security.

Pointing to escalating tensions in the Middle East and the need for increasing cooperation among the regional states, Zarif said, “We are the ones who will definitely remain in this region and foreigners are meant to leave.

During the meeting, the two sides reviewed various aspects of bilateral ties between Tehran and Kuwait City, regional issues with special emphasis on Syria and Yemen, the ongoing situation in the Persian Gulf region, important international issues as well as other topics of mutual interest.

The Iranian foreign minister arrived in Kuwait on Saturday, and later in the day held an official meeting with members of Iran-Kuwait Friendship Association, exchanging views on regional issues.

In a post on his Twitter account on Saturday night, Zarif said he is “in Kuwait for high-level talks” after a busy day of “active diplomacy”.

Several oil tankers have mysteriously been targeted near the Persian Gulf region in the past months, with Washington and its ally Saudi Arabia quickly blaming Iran for the attacks.

Tehran has rejected any involvement, saying the incidents appear to be false flag operations meant to frame the Islamic Republic.

Washington has used recent developments in the Strait of Hormuz to call for the formation of a naval collation in the Persian Gulf. The appeal has so far been coldly received by its allies.