TEHRAN, August 19 -Fish scientists on the hunt for non-native species are using an array of sophisticated techniques, including high-tech databases, storm maps and DNA samples to track destructive newcomers to U.S. waterways. 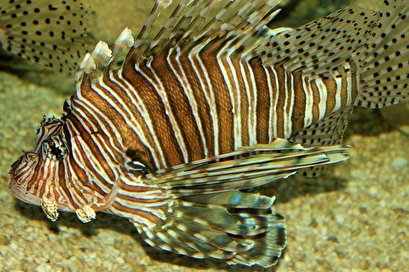 TEHRAN, Young Journalists Club (YJC) -Invasive species with few natural predators can spread like biological wildfires, pushing out native species and permanently changing ecological environments. Invasive species in the U.S. on land and water are estimated to cost $120 billion per year, according to the U.S. Geological Survey.

At the Gainesville, Fla., Nonindigenous Aquatic Species Program, fish scientists have been gathering data on the locations of non-native water creatures for 30 years, which is now online in an interactive database.

"We track things that live in the water anywhere they're not supposed to, anywhere in the U.S.," said Matthew Neilson, the fishery biologist.

Photos of unusual fish or other water species can be uploaded by state wildlife managers or the public. An alert system flags a new species discovered in new regions and sends emails to wildlife managers and state departments of natural resources.

"We're trying to give resource managers a warning before some non-native species shows up," Neilson said.

Some of these invaders include Asian carp species, including the bighead, silver and grass carp, which are threatening the Great Lakes and the region's $4.5 billion fishery industry.

Other disruptive invaders include zebra and quagga mussels and round goby in the northern United States, and the hyper-predator lionfish, which is eating its way up the East Coast as far as Rhode Island and throughout the Caribbean and Gulf of Mexico.

Scientists also are using the tech tools to track destructive giant snails and Burmese pythons, among other animals.

For example, after Hurricane Harvey in 2017, the USGS storm mapping system showed that giant apples nails were discovered in Louisiana's Calcasieu River-Bayou, possibly migrating from the Lacassine National Wildlife Refuge to the east, Neilson said.

The large mollusk can reach 6 inches and gobbles up aquatic plants. Originally from Asia, the apple snail has become a major pest in the rice fields of China and the Philippines, according to the Aquatic Nuisance Species task force. East Texas and Louisiana rice crops might be threatened by the apple snails, which also destroy habitat for other native species, Neilson said.

Another method developed for tracking non-native species is biosurveillance that collects environmental DNA, a biological marker that can indicate the presence of a species of animal.