TEHRAN, August 19 - Eight Palestinian administrative detainees are currently on hunger strike refusing to eat or drink to protest their illegal detention without charge or trial at Israeli jails. 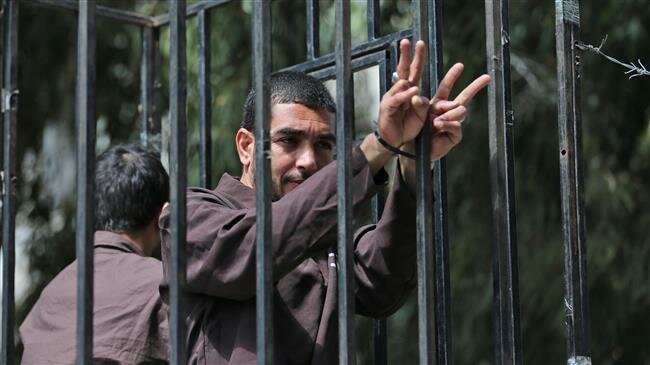 The pair joined six other Palestinian administrative detainees, who have already begun a hunger strike over the same cause. Dozens of other prisoners have already joined the strike in solidarity with the six, now eight, detainees.

Over 500 detainees are under the administrative detention, which is a sort of imprisonment without trial or charge that allows Israel to incarcerate Palestinians for up to six months, extendable an infinite number of times.

Some prisoners have been held in administrative detention for up to 11 years without any charges brought against them.

The prisoners reject the intake of any food or water to step up pressure on the Israeli authorities – the so-called the Israel Prison Service - to meet the demands of the eight detainees who have been on hunger strike, particularly Huthaifa Halabiya, who first started the protest move 50 days ago.

According to the report, Halabiya’s health condition is increasingly deteriorating while the Israeli authorities completely ignore his demands and complaints and refuse to offer him medical care.

Halabiya is currently being held in isolation in Ramleh Prison & Clinic.

More than 7,000 Palestinian prisoners are currently held in some 17 Israeli jails, dozens of whom are serving multiple life sentences.

It is estimated that between 500 and 700 Palestinian minors, some as young as 12 years old, are arrested and brought to trial in Israeli courts. The most common charge is stone-throwing.

The detainees have continuously resorted to open-ended hunger strikes in an attempt to express their outrage at the detentions.

Back in 2015, the Tel Aviv regime approved a law that authorizes force-feeding the Palestinian prisoners on hunger strike, a practice rejected by the United Nations as a violation of human rights.