TEHRAN, August 24 - Chastising the US for its resistance on applying unilateral policies, pulling out from international treaties and breaking international norms, Mousavi expressed concern about Americans' missile test after withdrawal from the Intermediate-Range Nuclear Forces Treaty 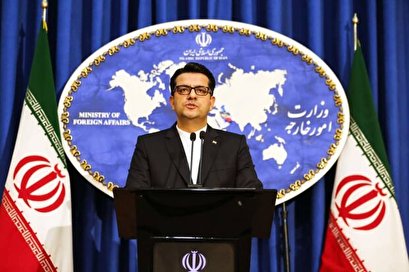 The US measure ignites the resumption of an arms race among some world countries which will end into instability and will be a threat to international peace and security, he said, it will impose high expenses on other countries and will reduce the level of people’s welfare across the globe.

The Iranian official urged international bodies and all world countries to show a proper reaction about the US measures and its withdrawal from international treaties.

The US Defense Department announced on Monday that it had tested a cruise missile for the first time since Washington scrapped INF earlier this year.

The missile blasted from a launcher on San Nicolas Island, a Navy test site off the coast of Los Angeles, California, and sped above the Pacific Ocean for more than 500 kilometers before striking its designated target, the Pentagon said in a statement.

“Data collected and lessons learned from this test will inform the Department of Defense’s development of future intermediate-range capabilities,” it added.

The test marks a new period for the American military following the August 2 demise of the INF agreement, which had been signed in December 1987 by the then-US President Ronald Reagan and Soviet Union leader Mikhail Gorbachev, eliminating an entire class of nuclear-capable missiles.

The pact forced the rival superpowers to scrap more than 2,600 land-based missiles considered destabilizing to Europe due to their capability to launch a nuclear strike from anywhere without early warning.

It was not clear how the US would proceed to employ the new weapon.

However, US Secretary of Defense Mark Esper has indicated that the chance for a deployment now exists in Asia as a deterrent.

“The Department of Defense will fully pursue the development of these ground-launched conventional missiles.” Asked by reporters when such missiles would be deployed in Asia, Esper said he preferred them to be installed in “months.”

Back on August 6, Russian President Putin had said that Moscow would be forced to start developing short and intermediate-range land-based nuclear missiles if the US started doing so after the termination of an arms control treaty by the US.

He had also warned that Washington’s endeavors to dismantle the Intermediate-Range Nuclear Forces (INF) Treaty can result in an unrestrained arms race.