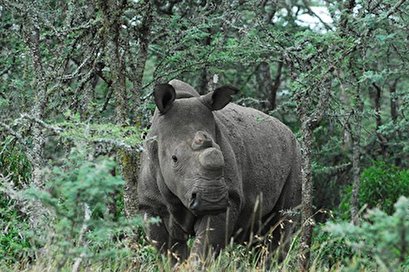 Though the insemination was a success, it was only the first step in the artificial breeding process. Now, researchers must hope the fertilized eggs yield viable embryos. If so, the embryos will be frozen and eventually implanted in the wombs of southern white rhino surrogate mothers.

"We were surprised by the high rate of maturation achieved as we do not get such high rate -- comparable to what we get with horse oocytes -- with southern white rhino females in European zoos," Cesare Galli, a researcher at Avantea in Cremona, Italy, said in a news release. "The semen of Saut was very difficult to work with and to find three live sperms needed for the eggs of Najin we had to thaw two batches of semen."

The breeding program is being led by scientists in Germany at the Leibniz Institute for Zoo and Wildlife Research.

Though neither Najin nor Fatu can get pregnant, they were able to provide researchers with healthy eggs. Last week, researchers announced the recovery of several eggs from the two rhinos.

"Both the technique and the equipment had to be developed entirely from scratch," Thomas Hildebrandt, professor at Leibniz-IZW, said in a news release. "We were able to harvest a total of 10 oocytes -- five from Najin and five from Fatu -- showing that both females can still provide eggs and thus help to save these magnificent creatures."

Even if the entire project is a success and southern white rhinos carry a northern white rhino fetus to full term, it's not clear whether the babies will possess enough genetic diversity to rebuild the population.

"This whole methodology is in its infancy," Susie Ellis, the executive director of the International Rhino Foundation, a non-profit conservation group, told National Geographic. "It's a long way from developing a cluster of cells that's an embryo to having a rhino on the ground -- and then subsequently having a herd of rhinos on the ground."