TEHRAN, August 28 -Malaysia's ex-prime minister Najib Razak played a pivotal role in plundering the state's 1MDB fund and channeled hundreds of millions of dollars into his own bank account, a prosecutor said Wednesday at the opening of his most significant graft trial. 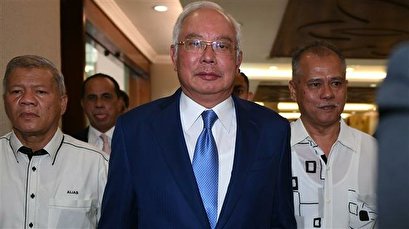 TEHRAN,Young Journalists Club (YJC) -Claims that Najib and his cronies pilfered massive sums from the fund and spent it on everything from real estate to artwork contributed to the defeat of his long-ruling coalition to a reformist alliance.

After losing power last year, the former prime minister was arrested and hit with dozens of charges related to 1MDB. He is expected to face several trials.

The first started in April but Wednesday's is the biggest, with Najib accused of 21 counts of money-laundering and four of abuse of power, centering on allegations that he illicitly obtained 2.28 billion ringgit ($540 million) from 1MDB.

Opening the trial, lead prosecutor Gopal Sri Ram told the High Court in Kuala Lumpur that Najib was a key player in the plunder of 1Malaysia Development Berhad, a fund established with the ostensible aim of boosting Malaysia's economy.

"His objective was to enrich himself," the prosecutor told the packed courtroom, as he outlined a series of complex financial transactions between 2011 and 2014 he said were used to funnel cash to Najib.

Najib — who was also finance minister — put himself in "sole control" of the fund's important affairs and used his position "to exert influence over the board of 1MDB to carry out certain abnormal transactions with undue haste."

Gopal said the former premier was the "mirror image" of fugitive financier Jho Low, who has been charged in both Malaysia and the United States.

"Jho Low and the accused acted as one at all material times," he said. Low held no official positions at 1MDB but was believed to have exerted huge influence over its operations.

In addition, Najib "took active steps to evade justice. He interfered with the course of investigation of this case," Gopal said.

The 66-year-old, who was in court for the start of the trial, denies all the charges.

The case relates to a crucial part of the 1MDB saga.

When reports surfaced in 2015 that huge sums linked to the fund had flowed into Najib's bank account, it dramatically ratcheted up pressure on the leader and his inner circle.

The attorney-general later cleared Najib of any wrongdoing, saying the money was a personal donation from the Saudi royal family, and closed down domestic investigations.

Prosecutors plan to call about 60 witnesses in a trial that is likely to be lengthy and complex, but Najib's lawyers have complained they have not had sufficient time to prepare for such a major case.

Prosecutors wrapped up their case Tuesday in Najib's first trial, which involves the theft of 42 million ringgit from a former unit of 1MDB. The judge will rule in November whether it is strong enough to continue.

The new government of Prime Minister Mahathir Mohamad, Najib's mentor-turned-nemesis, came to power partly on a pledge to probe 1MDB and has been keen to push ahead with the cases against the toppled leader.

The US Department of Justice, which is seizing assets in America allegedly bought with looted 1MDB money, believes that $4.5 billion was stolen from the fund.

Investment bank Goldman Sachs is also under scrutiny over 1MDB as it helped arrange bond issues for the fund. Malaysia claims large amounts were misappropriated in the process and has filed charges against the bank and some current and former executives.

The bank has vowed to fight the charges.