Face of Lucy's ancestors revealed by 3.8 million-year-old skull in Ethiopia

TEHRAN, August 29 - The discovery of a rare 3.8-million-year-old hominin skull unearthed in Ethiopia promises to offer fresh insights into the complexities of early human evolution. 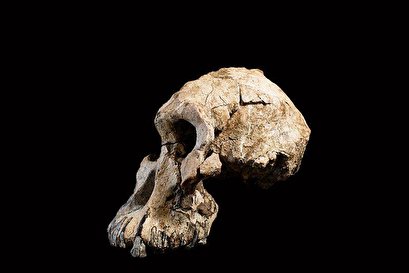 TEHRAN,Young Journalists Club(YJC) -The fossil's jaw and teeth suggest it belongs to the species Australopithecus anamensis, an ancestor of the famed Lucy hominin, Australopithecus afarensis. Researchers have previously found only fragments of A. anamensis, most around 4 million years old.

Until now, paleontologists surmised that A. afarensis slowly morphed into A. anamensis -- that their evolutionary relationship was linear. The latest discovery, detailed this week in the journal Nature, suggests otherwise -- that two species overlapped on the evolutionary timeline.

The specimen, dubbed MRD cranium, was found at a dig site in Ethiopia's Afar Regional State, part of the ongoing Woranso-Mille project, which has yielded hundreds of mammal and hominin fossils.

"I couldn't believe my eyes when I spotted the rest of the cranium. It was a eureka moment and a dream come true," Yohannes Haile-Selassie, an adjunct professor at Case Western Reserve University, said in a news release.

The discovery of the uniquely well-preserved skull has made it possible to revisit and analyze previously unearthed hominin remains, comparing them to both A. afarensis and A. anamensis fossils. By comparing MRD and Lucy, paleontologists can reconsider other australopith facial fossils and identify which skull features are primitive, or inherited, and which are derived, or evolved.

"This, in turn, will affect inferences about the evolutionary relationships between species," Fred Spoor, a researcher with the Max Planck Institute for Evolutionary Anthropology, wrote in Nature.

"This is a game changer in our understanding of human evolution during the Pliocene," Haile-Selassie said.

Though the latest findings suggests A. afarensis and A. anamensis were alive in East Africa at the same time, for 100,000 years, it's still likely the latter evolved from the former, according to Haile-Selassie, but the speciation event was perhaps a bit messier than previously hypothesized. It's possible, researchers suggests, a group of A. afarensis hominins split off and became geographically and genetically isolated, eventually evolving into a new species.

Understanding the intracacies and timing of early human evolution can help paleontologists figure out not just the how but the why -- why the earliest human ancestors evolved certain traits.

By studying fossil pollen grains and chemical residues left by plant and algae fossils in lake and delta sediments collected near the MRD discovery site, scientists were able to provide a snapshot of what life looked like for the early hominin.

"MRD lived near a large lake in a region that was dry," said Naomi Levin, a co-author on the study from University of Michigan. "We're eager to conduct more work in these deposits to understand the environment of the MRD specimen, the relationship to climate change and how it affected human evolution, if at all."