Sudanese demand info about those missing after military crackdown in June

TEHRAN, August 31 -Hundreds of Sudanese take to the streets in the capital to demand authorities provide information about almost a dozen demonstrators who went missing during the military crackdown on a sit-in protest in Khartoum in June. 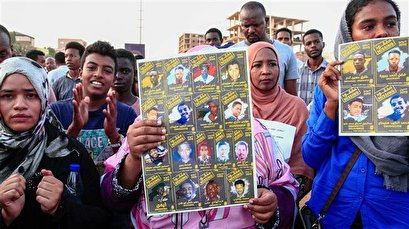 TEHRAN,Young Journalists Club(YJC) -Protesters gathered in Khartoum and its twin city of Omdurman on Friday, carrying pictures of those missing.

"We also want an independent investigation into their cases,” said a protester.

Thousands of Sudanese protesters, demanding civilian rule, were violently dispersed by armed men in military fatigues outside the Defense Ministry compound, in the capital on June 3. According to doctors linked to the protest movement, more than 100 people were killed that day.

The crackdown triggered global condemnation, with international organizations and several countries calling for an independent probe into the killings.

At least 11 people were reported missing after the crackdown, according to lawyers linked to the protest movement.

Other protesters may also have gone missing, but their cases would need further documentation, they said.

The sit-in outside the military headquarters began on April 6, after a brief pause in the more than three months of protests triggered by a deepening economic crisis blamed on long-time President Omar al-Bashir.

Sudan’s military toppled and then arrested Bashir, putting an end to his nearly 30-year rule. It also formed a transitional military council to run the country.

Protesters, however, remained in the streets, calling on the country’s military rulers running the country to hand over power to a civilian government.

Protest organizers say at least 250 people were killed in the unrest.

The military, which stands accused of ordering the massacre of peaceful protesters, formed an eleven-member sovereign council with the opposition earlier this month to rule the country over a three-year transition period.

The council, made up of five generals and six civilians, will initially be led by General Abdel Fattah Abdelrahman Burhan, who took over as Sudan’s leader following the ouster of Bashir in April.

A civilian leader appointed by the protest movement is to succeed him and rule for the remaining 18 months, after which elections will be held.