TEHRAN, oct 10_“The US allies, Saudi Arabia and Israel regime, are now discouraged with it and fully aware that the US cannot protect them in difficult days,” Chief Commander of Islamic Revolutionary Guards Corps (IRGC) Major General Hossein Salami said on Thursday in Ardabil province. 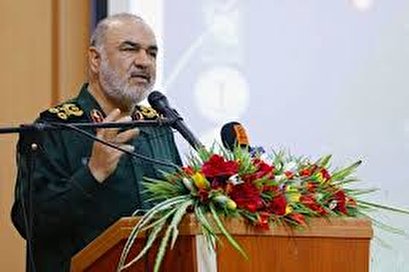 TEHRAN, Young Journalists Club(YJC)_“Americans admit the options they have on the table are not practical against Iran,” he said referring to failure of the US policies against Iran during the past years.

“The US is powerful but it is weak in using its power," Brigade General Salami added.

“The more Americans pay to reach their goals, the less they gain their favorite results,” he said, “They can not gain their political interests while they pay huge amount of money on economic and military options.”

Salami noted on Wednesday that no country has the right to intervene in the fate of the Iranian nation.

“All world powers should know that if they want to toy with future of Iranian nation, we will toy with their own future,” he said.

He pointed to the need to expand viewpoints of the Islamic Revolution across the world, adding, “to be an independent country, we should be powerful because we have learned victory requires constant watching of enemies.”

Elsewhere, pointing to Iran’s power at waters, he said that “Today, the Islamic Republic and IRGC possess state-of-the-art defense technologies to manufacture and improve military boats.”

“We should move towards producing Unmanned Surface Vehicles (USVs); this is attainable when considering our capabilities,” he added.