TEHRAN, oct 11_Russian and the United States have used their veto power at the United Nations Security Council to vote down a European statement against Turkey's invasion of northern Syria. 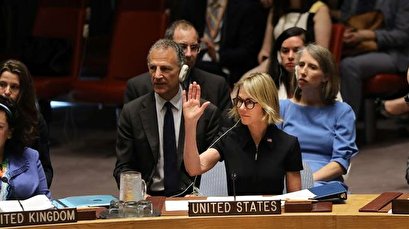 Moscow and Washington had their own reasons to veto the statement by five European members — France, Germany, Belgium, Britain and Poland — who had called the meeting to end the bilateral military action.

In a joint statement after the discussions, the European called on Ankara "to cease the unilateral military action," warning that the offensive threatens progress.

Russian UN Ambassador Vassily Nebenzia said his country would only support UNSC motions that address broader issues, including the presence of foreign forces in Syria.

US Ambassador Kelly Craft, on the other hand, told reporters that as US President Donald Trump "has made it clear" Washington does not "in any way" endorse Turkey's actions.

Later in the day, Turkish Defense Minister Hulusi Akar spoke with his French counterpart Florence Parly, US Secretary of Defense Mark Esper and UK Defense Minister Ben Wallace over phone to fill them in on the latest developments.

The UNSC meeting came a day after Turkey launched Operation Peace Spring, its third in a series of cross-border operations in northern Syria.

Turkish President Recep Tayyip Erdogan claims that the offensive only targeted militants affiliated with Daesh as well as the Kurdish militia called People's Protection Units (YPG) in order to establish a Turkish safe-region there.

Ankara says the YPG is effectively the military of wing of the outlawed Kurdistan Workers' Party (PKK). The YPG also forms the backbone of the so-called Syrian Democratic Forces (SDF), which has much of northern Syria under control.

Turkey, according of Erdogan, is trying to establish a safe zone in order to resettle millions of refugees in there.

Meanwhile, human rights groups have been warning that a war of this scale would be deadly for civilians living in crowded cities on both sides of the border. There are also no exact data available on the real extent of the casualties.

Syrian sources reported late Thursday that at least four more Syrians were killed and four more were injured due to Turkish shelling in the border town of Ras al-Ayn.

Earlier, the SDF announced that nine more civilians had been killed in Turkish airstrikes.

Erdogan said Thursday that his country's forces had already killed, injured or captured a total of 109 Kurdish forces. However, the SDF said the number was exaggerated.

The so-called Syrian Observatory for Human Rights (SOHR), which is based in London, said at least 16 SDF militants had been killed and dozens more injured.

The SDF announced on one of its Twitter accounts that the group had deterred Turkish forces east of the Jalab river, destroying three military vehicles and killing 22 soldiers.

In retaliation for the Turkish attacks against civilian targets, Kurdish militants fired at least three rounds into the Turkish city of Akcakale, killing two civilians.

The International Rescue Committee aid organization said at least 64,000 people had reportedly fled their homes and the number could surpass 300,000 if the offensive continued.

Kurdish authorities have accused Turkey of attacking one of the several prisons Daesh militants are held in Qamishli in the east of the border region, in what they denounced as a "clear attempt" to help the terrorists escape.

More than 12,000 suspected Daesh militants, including many foreign nationals, are being kept in several SDF-run prisons across northern Syria. More than 58,000 of their family members live across SDF-controlled areas.