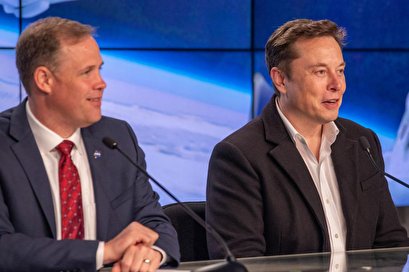 TEHRAN, Young Journalists Club(YJC)_"This is a big deal for our country," Bridenstine said, standing next to Musk at SpaceX headquarters in Hawthorne, Calif. "We can't get it wrong. In fact, we have to get it right."

The joint appearance of NASA's top executive and the leader in commercial space was focused on timing and budget for NASA's Commercial Crew Program, which is the U.S. effort to once again launch people from Florida to the International Space Station. Since 2011, that has only happened aboard Russian spacecraft launched from Ukraine.

Astronauts Bob Behnken and Doug Hurley stood next to the pair as they addressed a crowd at the SpaceX headquarters.

"We've launched [cargo] to International Space Station 19 times," Musk said. "I think a lot of people don't realize that we've done that 19 times." He added, "Human spaceflight is the reason SpaceX was created. We're honored to be doing that with NASA. It's truly a dream come true."

Musk and Bridenstine said it appears people will not launch, even on a test flight, for the rest of 2019. But they said up to 10 tests of new parachutes will happen over the coming months, and they hope for a crewed flight in early 2020.

The united front comes after Bridenstine issued a statement Sept. 27 calling out SpaceX for delays in the development of the company's Commercial Crew capsule, Crew Dragon. Bridenstine made the statement on the eve of Musk's big announcement in Texas that he's proceeding toward a full prototype of SpaceX's Starship -- a big, next-generation rocket/spaceship designed to carry people, eventually, to Mars.

In the meantime, SpaceX has a $2.6 billion NASA contract to shuttle American astronauts to and from the International Space Station using the Crew Dragon capsule.

Musk responded to Bridenstine's statement in a comment to CNN, saying maybe Bridenstine was referring to delays in NASA's own program to build a big rocket called the Space Launch System that could travel to the moon, which is years behind schedule.

In their joint appearance Thursday, both men referenced their exchange, and said the safety of the astronauts is their top priority as they pursue return to U.S. human spaceflight.

He said he was signalling to SpaceX that the nation's top priority was getting astronauts back to the ISS from U.S. soil. But Bridenstine added that NASA is fully supportive of SpaceX's Starship project.

"Is this like some kind of NASA bureaucracy that is delaying things? It is not," Musk said. He said the purpose is to "ensure that American astronauts will be safe. Only at that point would we launch."

Bridenstine was careful not to speak ill of Russia.

"The partnership with Russia is important and it's good," he said.

Bridenstein thanked Musk for a tour of SpaceX headquarters. He said it was good to shake hands SpaceX employees who are working on correcting problems with the Crew Dragon capsule that caused an explosion in a test firing in April.

Since then SpaceX found that a titanium valve caused the explosion when it came into contact with liquid oxygen propellant. SpaceX has reduced the number of valves in the spacecraft and is using a different type of connection.