TEHRAN, oct 12_Commander of the Iranian Navy Rear Admiral Hossein Khanzadi and his counterparts from other Caspian Sea littoral states signed a memorandum of understanding (MoU) on Friday to boost naval cooperation. 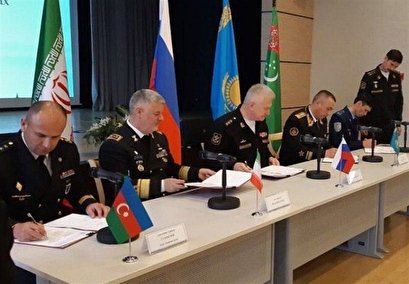 TEHRAN, Young Journalists Club(YJC)_The navy commanders of the five Caspian Sea littoral states concluded their meetings in Russia with the signing of the MoU on naval cooperation.

The agreement covers various areas of cooperation, including military training, rescue and relief operations, and the exchange of information.

Khanzadi arrived in Moscow on Tuesday to participate in the 4th meeting of the Caspian Sea navy commanders.

In a meeting on Thursday, Khanzadi and Commander of Russia’s Navy Nikolai Yevmenov weighed plans for closer interaction in combatting common threats, a trilateral naval exercise with China in the Indian Ocean, and a joint maritime rescue and relief exercise in the Caspian Sea.

In April, the Iranian Navy commander unveiled plans for a joint war game with Russia in northern parts of the Indian Ocean and the Sea of Oman.

The Iranian Navy has held several exercises with the neighboring countries in recent years.