General elections kick off in Mozambique

TEHRAN, oct 15_People are voting in presidential, parliamentary, and provincial elections in Mozambique, amid concerns that a recent peace deal between the country’s ruling party and opposition could come under threat in the event of election-related violence. 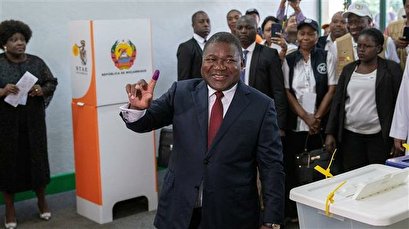 Authorities will start counting the ballots after polls close at 6 pm local time and are expected to continue through the night.

Preliminary results are expected no earlier than Wednesday.

The vote is a competition between the ruling Frelimo Party of President Filipe Nyusi and former rebel group-turned-opposition Renamo, which is led by Ossufo Momade.

The results are likely to see the president’s party secure a second term. Frelimo has been in power for 44 years, since Mozambique’s independence from Portugal in 1975.

The opposition, meanwhile, is expecting an opportunity for a strong performance in the provincial and legislative races.

A peace deal was signed between President Nyusi and Momade in August, ending years of an armed conflict between government and rebel forces in the country.

Rights groups are now concerned that the deal could be jeopardized since elections have historically been a trigger for violence in Mozambique.

At least 44 people were killed during the election campaign, although most of them died in campaign-related road accidents and some in a stadium stampede at a pro-Nyusi rally.

The United States Embassy warned on Friday of “credible threats” of violence in Nampula. It warned its citizens to avoid the northern city.