TEHRAN, Nov 4_Iranians are holding rallies in various cities to mark the 40th occupation anniversary of the former US embassy in Tehran, which gained notoriety as the "Den of Spies" after angry students occupied the compound and recovered thousands of documents proving Washington's espionage activities there. 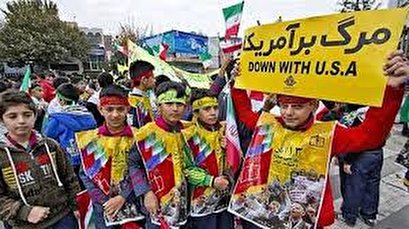 TEHRAN, Young Journalists Club(YJC)_In capital Tehran, students joined a large gathering staged outside the former embassy building from the early hours of morning to honor what is regarded as a milestone in Iran's ongoing fight against the world arrogance.

The demonstrators expressed their opposition to the global hegemony by chanting slogans against the United States and Israel and set their flags on fire in condemnation of their policies of creating havoc in other countries.

The embassy was taken over by hundreds of students on November 4, 1979, nearly nine months after the Islamic Revolution dethroned the US-backed Pahlavi regime.

The students detained 66 embassy staff who were in the process of destroying classified documents that would have incriminated them in plotting to topple the nascent Islamic Republic.

Iran released women, African Americans and as well as a man who was diagnosed with multiple sclerosis days later but kept the remaining 52 detainees for 444 days.