TEHRAN, Nov 7_Iran says an inspector of the International Atomic Energy Agency has left the country after she was prevented from entering a nuclear site of the Islamic Republic for carrying "suspicious" materials. 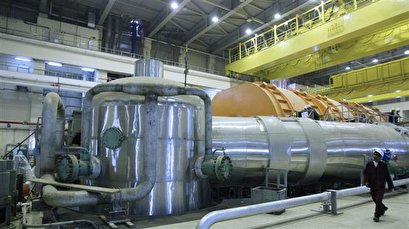 TEHRAN, Young Journalists Club(YJC)_The Atomic Energy Organization of Iran (AEOI) said Wednesday that the female monitor left her mission unfinished and flew out of Iran after security staff at the Natanz uranium enrichment facility didn't let her in.

"As it is protocol, all of the IAEA inspectors' belongings are closely inspected and scanned before they enter any of the country's nuclear facilities," read the AEOI statement.

"Upon this lady inspector's entry, the security control machines sounded the alarm and denied her entry," it said, adding then that Iran had reported the issue to the IAEA.

Iran also told the international agency in a report that the inspector's previous admissions at various sites were all scrapped and as a result, she decided to abort her mission and go back to the Austrian capital of Vienna.

The report also asked the agency to help with investigations into the matter and it accepted.

"The investigations are ongoing," the AEOI said, noting that the Iranian mission at the IAEA would present it with a comprehensive report on the matter on Thursday.

The IAEA monitors have been traveling in and out of Iran over the past months amid Tehran's decision to cut back on its commitments under a 2015 nuclear deal, dubbed the Joint Comprehensive Plan of Action (JCPOA), in response to violations by the US and a lack of action to salvage the accord on part of the European signatories -- the UK, France and Germany.

The measured response entered its fourth step on Wednesday, after President Hassan Rouhani announced that Iran will resume injecting uranium gas into centrifuges at its Fordow enrichment facility.

The previous third stages were characterized by enriching uranium beyond the 3.67-percent allowed under the JCPOA and stockpiling it beyond the 300kg cap set by the agreement. Tehran has also authorized broader nuclear research beyond JCPOA limits.