TEHRAN, Nov 9 _Turkish President Recep Tayyip Erdogan says his country’s troops will not leave Syria until other countries pull out, insisting that Ankara will continue its cross-border offensive against Kurdish militants in northeastern parts of the Arab country until every one of them has left the region. 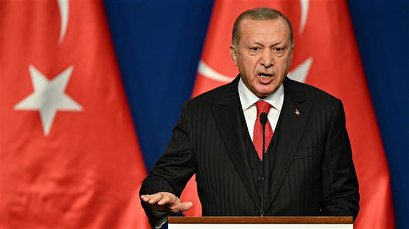 Ankara regards the US-backed YPG as a terrorist organization tied to the homegrown Kurdistan Workers’ Party (PKK) militant group, which has been seeking an autonomous Kurdish region in the Anatolian country since 1984.

Ankara is seeking the establishment of a 32-kilometer “safe zone” totally clear from the presence of Kurdish militants in northeastern Syria. Turkey wants the area to be used for the relocation of two million Syrian refugees living in Turkey.

“We won’t quit before the last terrorist leaves the region. This is one dimension of the issue. Secondly, we will not quit before other countries leave. We are in favor of Syria’s unity and solidarity. We never want it disintegrated,” Erdogan told reporters on Friday, when he was asked whether Ankara’s “Operation Peace Spring” would continue.

After seizing a 120-km swathe of land along the border, Turkey struck deals with the US and Russia to keep the Kurdish militants out of that so-called buffer zone.

On October 22, Erdogan and his Russian counterpart Vladimir Putin signed a memorandum of understanding that asserted YPG militants must withdraw from the Turkish-controlled "safe zone" within 150 hours, after which Ankara and Moscow would run joint patrols within the area.