Muqtada al-Sadr slams US for interfering in Iraq internal affairs

TEHRAN, Nov 12_Influential Iraqi Shia cleric Muqtada al-Sadr has lashed out at the United States for its interference in Iraq's internal affairs, threatening to take millions of demonstrators to streets if Washington keeps meddling in the Arab country. 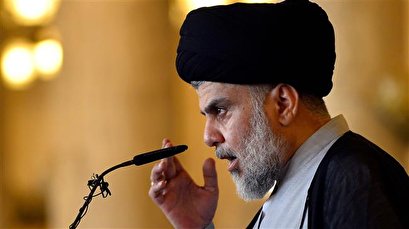 TEHRAN, Young Journalists Club(YJC)_In a statement on Monday, al-Sadr said that the Iraqi people want an early election free from the US intervention, as the country does not need arrogant countries and the the help of others.

"Once again it (America) proved that it interferes in the affairs of others," he said, noting that Iraq belongs to the people of Iraq who can decide their fate democratically and peacefully.

He added that Iraq does not want any interference from either the US or any other country, especially if they are going to bring corrupt officials and their authority "on the necks of the people".

"Iraqis will not allow Washington to turn their country into another Syria," said the leader of Sadrist Movement and Sairoon parliamentary alliance.

"Enough interference in our affairs! Iraq has a senior who can protect it and does not need the intervention of either you or anyone else," al-Sadr noted.

He also warned that if Washington repeats its interference in the Arab country, he would take millions of angry protesters to the Iraqi streets, that will mark the end of the US existence.

Al-Sadr's statement came after the United States called on Iraqi officials to hold early polls as more people fall victim to ongoing anti-government protests that Baghdad says are being hijacked by foreign-backed elements.

In an statement on Sunday, the White House asked the Iraqi government "to halt the violence against protesters and fulfill President [Barham] Salih's promise to pass electoral reform and hold early elections."

"The United States is seriously concerned by continued attacks against protesters, civic activists, and the media, as well as restrictions on internet access, in Iraq," it said.

The US has been openly backing protesters in Iraq since they flooded the streets for the first time in early October to vent their anger over corruption and poor living conditions in one of the world's wealthiest countries in terms of energy resources.

However, the relatively peaceful movement soon turned violent as armed elements opened fire on police and protesters alike and attempted to infiltrate the heavily-protected Green Zone in the capital Baghdad, which is home to the government as well as foreign diplomatic missions.