Russian student kills one, wounds 3 before killing himself

TEHRAN, Nov 14_A 19-year-old male student has shot and killed a fellow student and wounded three others at a vocational college in Russia’s Far East on Thursday before committing suicide, Russian investigators said in a statement. 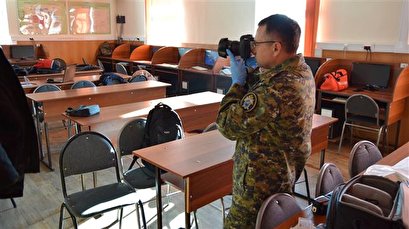 TEHRAN, Young Journalists Club(YJC)_School and college shootings are rare in Russia which has strict gun laws, and it was not immediately clear what the shooter’s motive was.

Investigators said the student opened fire with a hunting rifle at the college, which is located in the city of Blagoveshchensk, around 3,500 miles (5,600 km) east of Moscow near Russia’s border with China.

He shot dead another 19-year-old male student, and three other students had been taken to hospital after receiving gunshot wounds, investigators said.

One of the wounded was in a serious condition and was being operated on, the RIA news agency reported.

Vasily Orlov, the governor of the Amur Region, described the incident as a tragedy.

“I express my deep condolences to the relatives of the victims,” Orlov said in a statement on social media.