TEHRAN, Nov 24_Bolivia’s Congress has unanimously approved a bill that paves the way for a new presidential election in the crisis-hit country without ex-president Evo Morales, as the caretaker government met with protesters to end weeks of unrest. 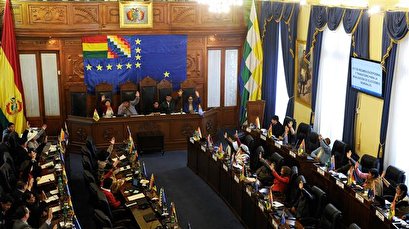 TEHRAN, Young Journalists Club(YJC)_Among other things, the newly-passed law annuls the results of the previous disputed vote held on October 20 and prevents Morales from running for the post again by barring candidates who served in both of the two previous terms from seeking re-election.

At least 32 people have been killed in violence that erupted after the October election, with protesters' blockades causing severe fuel and food shortages in La Paz and other cities.

The Senate approved the proposed law after an hours-long session that began Saturday morning. The lower house also voted for the bill later in the day.

Self-proclaimed Interim president Jeanine Anez will need to sign it before it can become law.

Morales' Movement for Socialism (MAS) partly holds a majority in both houses of Congress, but is divided over the left-wing leader and his political future.

Congress also needs to agree on a new seven-member electoral court, after members of the previous panel were removed for allegedly manipulating results.

New elections are seen as key to ending Bolivia's worst political upheaval in 16 years, which has deepened divisions between indigenous people loyal to Morales and Bolivia's mainly city-dwelling middle and upper classes.