TEHRAN, Nov 25_ France has designated Abu Dhabi as the headquarters for a so-called European-led naval coalition in the Persian Gulf, shortly after announcing that it is bolstering Saudi air defenses with new equipment. 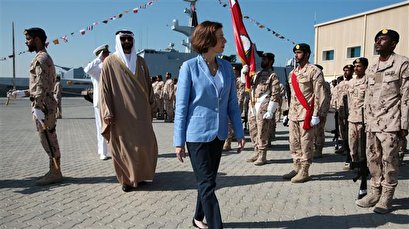 TEHRAN, Young Journalists Club(YJC)_"This morning we formalized that the command post will be based on Emirati territory," French Defense Minister Florence Parly told reporters at a French naval base in Abu Dhabi, the capital of the United Arab Emirates on Sunday.

According to the French defense minster, the European-led mission may start next year with about 10 European and non-European countries expected to participate in the mission.

The newly-designated headquarters will host about a dozen officials representing the involved countries, she said.

The announcement comes as France has been the main proponent for the European naval mission which seeks to allegedly patrol the Persian Gulf and the Strait of Hormuz, through which about a fifth of all oil consumed globally passes.

"We hope... to contribute to a navigation that is as safe as possible in a zone which we know is disputed and where there has already been a certain number of serious incidents," Parly said.

The European-led mission is allegedly independent of a similar US-led mission deployed in the region.