TEHRAN, Nov 65_During a visit to Qatar, Turkish President Recep Tayyip Erdogan has said a military base built in and jointly run with the Arab country can ensure stability and peace in the Persian Gulf region, as Ankara and Doha further close ranks in the face of a Saudi Arabian-led blockade on Qatar. 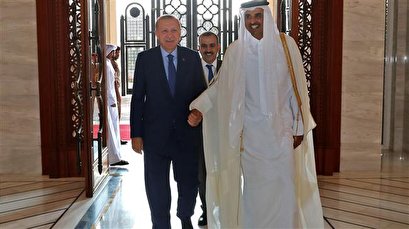 TEHRAN, Young Journalists Club(YJC)_The Turkey-Qatar Combined Joint Force Command “serves stability and peace of not only Qatar but also the [Persian] Gulf region,” Erdogan said on Monday after meeting troops at the newly-finished base, which can accommodate up to 5,000 soldiers.

The Turkish president dubbed the command as “the symbol of brotherhood, friendship, solidarity, and sincerity” between Ankara and Doha.

“We have never left our friends alone in any period of history against threats and risks — and we never will,” President Erdogan said, in an apparent reference to Turkey’s support for Qatar ever since Saudi Arabia and three of its client states imposed an embargo on Doha in 2017.

In June that year, Saudi Arabia, the United Arab Emirates, Egypt, and the tiny country of Bahrain severed diplomatic and trade relations with Qatar and imposed the blockade on the country shortly afterwards. The quartet accused Qatar of supporting terrorism, an allegation strongly denied by Doha.