TEHRAN, Dec 4_US President Donald Trump had barely been in the UK for a day before controversy began springing up over as Trump addressed the press at the London-hosted North Atlantic Treaty Organisation summit. 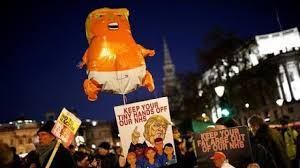 TEHRAN, Young Journalists Club(YJC)_In typical fashion, Trump fired from the hip with a wide range of criticisms aimed at his NATO allies, including the French President Emmanuel Macron and Germany, but for on looking Brits, the most concerning comments were regarding Brexit and Prime Minister Boris Johnson.

Trump initially claimed he would not interfere in the British elections during his three day visit – a promise he has failed to honor.

But speaking to demonstrators in the capital, it’s clear they are angry for other reasons too.

This is the third time Trump has visited the UK since becoming President and each time anti-Trump thousands of protesters gathered to condemn his views.

NATO is facing troubling times. Several disputes have sprung up between its members, while the issue of investment in the project has also become a recurring issue. This visit was supposed to promote unity and cover up the cracks but bringing people together just isn’t a quality Trump is particularly famous for.