Tehran 12 January_American military forces reportedly carried out a failed terror attack against another Iranian commander in Yemen the same day they assassinated Lt. Gen. Qassem Soleimani and other Iranian and Iraqi military officers in the Iraqi capital of Baghdad. 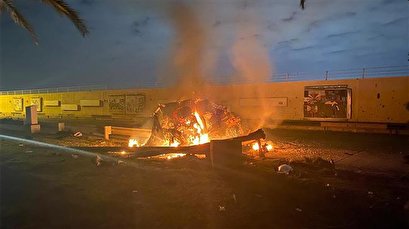 A New York Times report further pointed out that the Trump administration had offered a $15 million reward for information about Shahlai, also accusing him of involvement in a shadowy and unsubstantiated plot in 2011 to kill the Saudi ambassador to Washington.

According to the reports, the second terror mission by American forces – if true -- would raise questions on whether the assassination of Soleimani was part of Trump administration’s bid to take down the leadership of Iran’s Quds Forces of the Islamic Revolution Guard Corps (IRGC) or prevent what the White House has claimed as “an imminent attack on Americans” by Iranian.

The report came as US lawmakers from both dominating political parties have harshly criticized the rationale offered by Trump administration official for launching the terror attack against the senior Iranian military official.

This is while hawkish US Secretary of State Mike Pompeo tried to dodge question on Friday morning inquiring about the specifics of the “imminent attack” claim and other contradictory official statements, which American legislators have dismissed as “insufficient” and unconvincing.

Meanwhile, the House of Representatives on Thursday passed a resolution to limit Trump from ordering further military action against Iran, though the vote was largely symbolic and done mostly along party lines.

On January 3, US assassination drones killed Lieutenant General Qassem Soleimani, commander of the IRGC’s Quds Force, and Abu Mahdi al-Muhandis, the second-in-command of Iraq’s Popular Mobilization Units (PMU), among others, after targeting their vehicles in Baghdad. The terror attack took place under the direction of Trump, with the US Department of Defense taking responsibility for the strike.