'Corrupt acts’ by US, allies cause of current situation in region: Ayatollah Khamenei

Tehran 13 January_Leader of the Islamic Revolution Ayatollah Seyyed Ali Khamenei says ‘corrupt actions’ taken by the United States and its allies are the main cause of the current situation in the region, urging regional countries to boost cooperation to undo such actions. 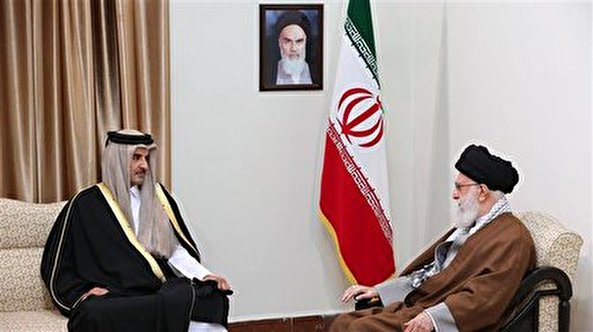 Describing the current conditions in the region as unfavorable, Ayatollah Khamenei said, “The reason behind this situation in corrupt actions taken by American and its allies and the only way to counter it is to rely on inter-regional cooperation.”

Highlighting Iran's advances in various fields of science and technology, knowledge-based activities as well as such utilities as water and power supply, Iran’s president said Tehran was ready to transfer its experiences in these fields to the friendly and brotherly country of Qatar.

In another part of his remarks, the Leader pointed to good political ties between Iran and Qatar, saying, "The two countries' economic relations are not on the same level as political relations and Iran-Qatar cooperation should further improve in common fields."

"The Islamic Republic of Iran has repeatedly announced and Mr. President [Hassan Rouhani] has also explicitly stated that Iran is ready for closer cooperation with regional countries," Ayatollah Khamenei noted.