No security in West Asia as long as US terrorist forces stay: Iran's Shamkhani

Tehran 14 January_The secretary of Iran's Supreme National Security Council (SNSC) says as long as terrorist forces of the United States are present in the region there will be no security and peace in West Asia. 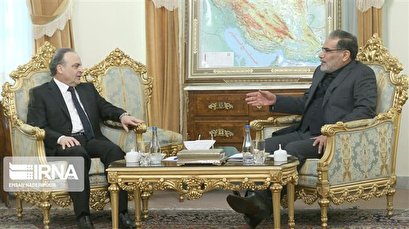 TEHRAN, Young Journalists Club(YJC)-In a meeting with the visiting Syrian Prime Minister Imad Khamis in Tehran on Monday, Ali Shamkhani said, “As long as terrorist forces of the United States stay in the West Asia region, this region will experience no stability, peace or sustainable security.”

Iran's top security official added, “There is no doubt that expulsion of the wicked US is possible through unity of regional nations and governments.”

Referring to the recent assassination of commander of the Islamic Revolution Guards Corps’ Quds Force, Lt. Gen. Qassem Soleimani, on order of US President Donald Trump in Iraq, Shamkhani said Trump and his “silly advisors” believed that they could bring about the collapse of the resistance front through assassination of its courageous commander.

“However, what they did backfired and the blood of this dear martyr and his companions led to further strengthening of the resistance front and caused people of the region and the world to hate America even more intensely."

The SNSC secretary pointed to the US-backed Israeli regime's indiscriminate attacks against the resistance front and said, "Undoubtedly, the martyrdom of General Soleimani will make the resistance front more determined to seriously counter the acts of aggression by the Zionist regime (Israel)."

The US military carried out a drone strike on January 3 against general Soleimani's motorcade upon his arrival in Baghdad.