Rouhani: Regional nations should not rest until US troops leave

Tehran 14 January_Iranian President Hassan Rouhani has warned about US attempts to seize control of Syria’s oil wells, among its other interventionist policies in the region, urging regional nations to spare no effort to send the American military home. 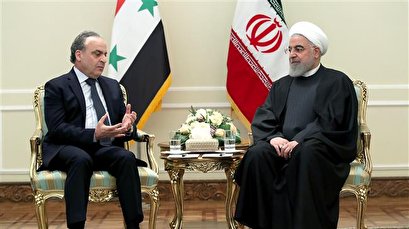 TEHRAN, Young Journalists Club(YJC)-“Today, the Americans’ interference in the affairs of other countries and their attempts to capture Syria’s oil wells have clearly revealed that they have never been concerned about the interests of regional nations and will not be so in the future,” Rouhani said in a meeting with Syrian Prime Minister Imad Khamis in Tehran on Tuesday.

He expressed gratitude to the Syrian government and nation for their sympathy with the Iranians over the US assassination in early January of top Iranian commander Lieutenant General Qassem Soleimani, who is a “great and highly-revered martyr not only among the Iranian people but among all freedom-seeking nations in the region and the entire world.”

Rouhani noted that General Soleimani became a target for Washington because he had supported the oppressed peoples in the region and thwarted plots hatched by the United States and other enemies against the Iranian people.

“We will never forget this big crime of the US and believe that regional nations should not rest until bringing an end to the US military presence in the region and evicting these invaders,” the Iranian president pointed out.

Elsewhere in his remarks, Rouhani urged Iranian and Syrian officials to accelerate the implementation of bilateral agreements and reiterated the Islamic Republic’s firm determination to further improve Tehran-Damascus relations.

He emphasized that Iran would keep supporting the oppressed nations in the face of the global arrogance as it has stood by the Syrian government and nation in their fight against terrorism.

Rouhani said Iran, Syria and other countries must continue their cooperation until achieving a final victory over terrorism and expelling foreign occupying forces from Syria and returning Syrian refugees to their homeland.

‘US presence in region amounts to occupation’

The Syrian prime minister, for his part, offered his condolences to Iran over the martyrdom of General Soleimani and said his loss was a major disaster for all freedom-seeking nations in the world.