Tehran 17 January_Iran's Defense Minister Brigadier General Amir Hatami says following Tehran’s firm missile response to the assassination of its top general by terrorist US forces in Iraq, the US had no choice but to finally give in to the resolve and power of the Islamic Republic. 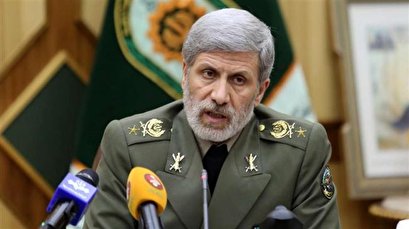 “Without a doubt, if the enemy had not received such a response, it would have taken further steps in line with its arrogant nature with more audacity, but it finally submitted to firm resolve and the power of the Islamic Republic of Iran,” the minister noted.

On January 3, the United States assassinated Lieutenant General Qassem Soleimani, who used to command the Quds Force of Iran’s Islamic Revolution Guards Corps (IRGC), among others in a set of airstrikes against Baghdad. General Soleimani has earned reputation as West Asia’s most revered anti-terror commander due to his indispensible contribution to defeating terrorist outfits such as Daesh across the region.

Leader of the Islamic Revolution Ayatollah Seyyed Ali Khamenei warned afterwards that a “harsh revenge” awaited the US.

The IRGC fired volleys of ballistic missiles last Wednesday in retaliation, hitting the US’s Ain al-Assad air base in the western Iraqi Anbar Province, and another facility in Erbil, the capital of the semi-autonomous Iraqi Kurdistan, both of which housed American forces.