Tehran 18 January_Hundreds of people have staged a demonstration in Jordan to express their resentment over the government’s multi-billion-dollar agreement to import natural gas from the Occupied Palestinian Territories. 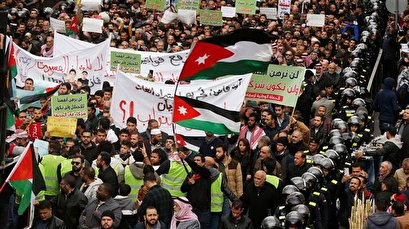 TEHRAN, Young Journalists Club(YJC)-On Friday, the protesters staged a rally, which was organized by the Jordanian National Campaign Against the Gas Agreement with the Zionist Entity, in the capital Amman, calling on Prime Minister Omar Razzaz to step down.

They also demanded the parliament, which will hold a session next Sunday to discuss the issue of natural gas imports from Israel, to vote against the agreement and hold those who signed it to account.

The demonstrators then urged all Jordanians nationwide to take part in anti-gas deal protests, push for the abolition of the agreement, and put all those responsible for the crime and treachery on trial.

The protesters also chanted slogans in condemnation of the gas agreement with Israel, and called for the ouster of Razzaz’s government.