Tehran 19 January_Prince Harry and his wife Meghan will no longer use the titles “royal highness” or receive public funds for their work under a deal that lets the couple step aside as working royals, Buckingham Palace announced Saturday. 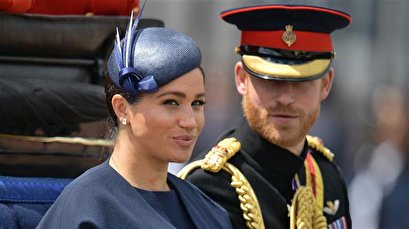 TEHRAN, Young Journalists Club(YJC)-Releasing details of the dramatic split triggered by the couple’s unhappiness with life under media scrutiny, the palace said Harry and Meghan will cease to be working members of the royal family when the new arrangements take effect in the “spring of 2020.”

The radical break is more complete than the type of arrangement anticipated 10 days ago when the royal couple stunned Britain with an abrupt announcement that they wanted to step down. They said they planned to combine some royal duties with private work in a “progressive” plan, but that is no longer on the table.

Harry and Meghan will no longer use the titles His Royal Highness and Her Royal Highness but will retain them, leaving the possibility that the couple might change their minds and return sometime in the future.

Harry’s late mother, Diana, was stripped of the Her Royal Highness title when she and Prince Charles divorced.

They will be known as Harry, Duke of Sussex, and Meghan, Duchess of Sussex. Harry will remain a prince and sixth in line to the British throne.

The agreement also calls for Meghan and Harry to repay 2.4 million pounds ($3.1 million) in taxpayers’ money spent renovating a house for them near Windsor Castle, Frogmore Cottage. The use of public funds to transform the house’s five separate apartments into a spacious single family home for them had raised ire in the British press. They will continue to use Frogmore Cottage as their base in England.

The deal came after days of talks among royals sparked by Meghan and Harry’s announcement last week that they wanted to step down as senior royals and live part-time in Canada.

The couple’s departure is a wrench for the royal family, and Queen Elizabeth II did say earlier this week that she wished the couple had wanted to remain full-time royals, but she had warm words for them in a statement Saturday.