Tehran 25January_Iraqi security forces have cleared concrete blocks from main protest sites in Baghdad and Basra, which a group of rioters had used to disrupt normal life. 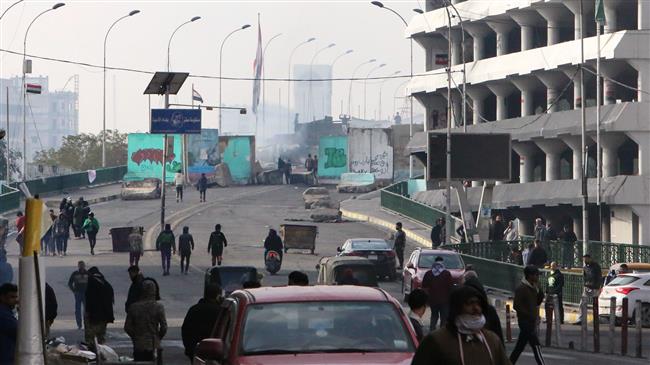 As they began opening roads, a group of protesters reportedly attacked them, triggering clashes which left several casualties.

The decision to open roads came a day after hundreds of thousands of Iraqis rallied in Baghdad to call for an end to US military presence in the country following high-profile assassinations and airstrikes targeting anti-terror forces.

Huge crowds of men, women and children of all ages converged on the Jadriyah neighborhood near Baghdad University, with protesters carrying banners and chanting slogans calling for the expulsion of US forces.

The massive rally came after influential cleric Moqtada al-Sadr called on Iraqis to stage "a million-strong, peaceful, unified demonstration to condemn the American presence and its violations".

Protesters chanted "get out, get out, occupier” as they massed in the Jadiriyah district of east Baghdad. Others chanted "Death to America”, while the Iraqi flag was widely flown.

Around 5,200 US troops are still in Iraq. Earlier this month, the Iraqi parliament voted to expel all American forces in the country.

US President Donald Trump has refused to discuss the withdrawal with Iraq’s acting prime minister Adel Abdul Mahdi and instead threatened to seize about $35 billion of Iraqi oil revenues held in a bank account in New York.

The rally coincided with a report by the Middle East Eye that the US was seeking to carve out a "Sunni state” in Iraq’s Anbar province in a bid to secure the presence of its military forces.