Tehran 30 january_US President Donald Trump on Wednesday signed a new North American trade agreement during an outdoor ceremony at the White House attended by about 400 guests - but not the key Democrats who helped secure congressional passage of the deal. 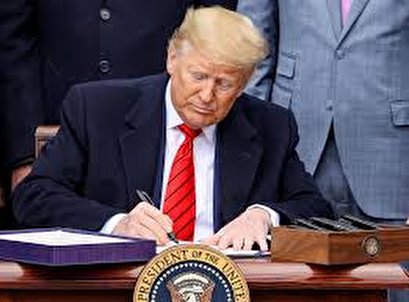 TEHRAN, Young Journalists Club(YJC)_Trump, on trial in the US Senate on charges of abusing power and obstructing Congress, welcomed Republican senators at the South Lawn event by name. Other guests included lawmakers from around the country, workers, farmers and chief executives, and officials from Mexico and Canada, the White House said.

"Today, we are finally ending the NAFTA nightmare and signing into law the brand-new US-Mexico-Canada Agreement," Trump told the crowd. Flanked by a group of American workers wearing hard hats, Trump said the agreement would bolster US economic growth, benefiting farmers, workers and manufacturers.

He said his concerns about NAFTA-triggered outsourcing had triggered his run for the presidency in 2016.

A wide array of business groups welcomed the agreement, which also won a rare endorsement of the AFL-CIO union federation. Mexico has already approved the deal, but it must still be ratified by Canada's parliament before it can take effect.

The influential United Autoworkers said the new deal would not restore hundreds of thousands of US manufacturing jobs lost to Mexico after NAFTA, and vowed to be aggressive in pushing for enforcement of the trade agreement's provisions.

Democratic presidential candidate Bernie Sanders, a Vermont senator who voted against the pact earlier this month, said the NAFTA replacement deal would not stop the offshoring of US jobs and amounted to "a giveaway to the fossil fuel industry."

He said he would immediately renegotiate the pact if elected.