Tehan 1 February _The United Kingdom has officially left the European Union after 47 years of membership, in a step cast by Prime Minister Boris Johnson as the dawn of new era. 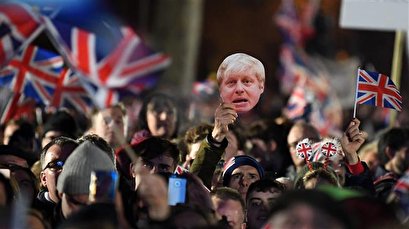 TEHRAN, Young Journalists Club(YJC)_Britain formally withdrew from the EU at 23:00 GMT on Friday, marking by both celebrations and anti-Brexit protests.

Thousands of Brexit supporters gathered outside the British parliament to celebrate the country’s departure from the EU after more than three years of wrangling. London's Parliament Square was lined with national flags, and government buildings were lit up in the red, white and blue of the Union Jack.

Candlelit vigils were held in Scotland, which voted to stay in the EU.

In a public address ahead of Brexit, Johnson promised a new era of friendly cooperation with the European Union.

He acknowledged there may be burdens ahead, but described Brexit an opportunity for "stunning success.”

In the pre-recorded statement, the premier stressed that the departure is not an end but a beginning.

"The most important thing to say tonight is that this is not an end but a beginning," he said.