Resistance only way for Iranian nation to confront oppression: Rouhani

Tehran 2 February _President Hassan Rouhani says the Iranian nation believes resistance is the only way to overcome the enemies' political and economic oppression. 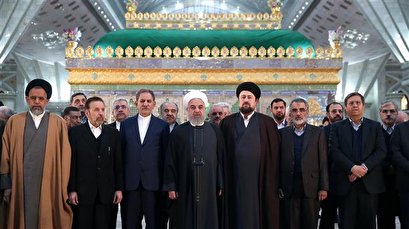 TEHRAN, Young Journalists Club(YJC)_Rouhani made the remarks on Sunday during a ceremony at Imam Khomeni’s mausoleum in southern Tehran, where he and his cabinet members renewed their allegiance with the ideals of the late founder of the Islamic Republic and Iranian martyrs.

The president stressed that if the Iranians continue the path followed by Imam Khomeini, they will be able to pass the "most difficult conditions" which the country is going through.

"If today - after two years of unprecedented sanctions - our nation has stood strong, it is because the people believe that tyrants are behind this oppression and aggression and that our Islamic establishment is on the right track," he said.

The Iranian people, he added, believe that "our policy should not be a policy of submission and surrender, even though we do not favor a policy of tension and confrontation either."

Rouhani also said the Iranians need unity and hope to succeed, saying, "We have no doubts that as long as the Republic and Islam are alive, our nation will be the winner against all plots."