Tehran 3 February _Former Bolivian president Evo Morales has announced his willingness to return home from exile and run for senator in the upcoming general elections scheduled for May. 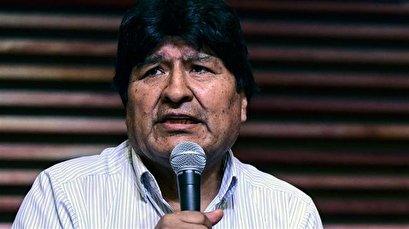 TEHRAN, Young Journalists Club(YJC)_Morales said in an interview published on Sunday that he wanted to leave Argentina, where is currently living in exile, even though an arrest warrant awaits him in Bolivia.

He had won Bolivia’s presidential election in October 2019, but the military and opposition claimed that the election had been rigged, inciting street protests.

In an apparent bid to prevent the country from plunging into chaos, Morales decided to resign a month later and leave the country. He says his forced resignation was the result of a US-engineered coup d’etat.

In the interview with the Chilean newspaper La Tercera, Morales reiterated that his replacement by acting president Jeanine Anez amounted to a putsch.

“What we lost with the coup we will recover on May 3 in democracy,” Morales said.

The ex-president said he would run for a seat in the Senate and declared himself a “victim of the United States” empire.

“I am sure the people of Bolivia are crying for me to return,” added Morales, referring to his strong popular base at home.

Morales, however, is now barred from standing as a candidate in the May ballot.

A judge in Bolivia on Sunday ordered six months of preventive detention to Morales’s legal representative handling his nomination process to stand as a legislator in the May ballot.

It is not the first time that Morales speaks of his willingness to go back home. He said back in November 2019 that the US — “just like the coup-mongering Bolivian right-wing” — was against his return, and that while he had a right to go back, he wouldn’t seek the presidency if he did.