Tehran 10 February _The Palestinian resistance movement Hamas has lauded the actions of West Bank Palestinians in rejecting the so-called "deal of the century" and has called for the formation of a united front against the plan. 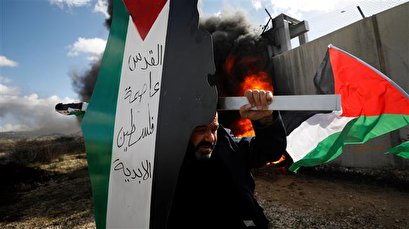 TEHRAN, Young Journalists Club(YJC)_"We indeed congratulate today our compatriots in the West Bank and Jerusalem al-Quds for their steadfastness and their extraordinary operations which challenged their calculations," said Hamas Spokesperson Fawzi Barhoum in a statement on Sunday.

"We call upon them to intensify their popular resistance efforts by using all possible means in all forms," he added.

The spokesman said that the formation of a unified front and struggle against the so-called deal of the century has become the demand of "all Palestinians".

Last week, Washington unveiled the so-called "deal", recognizing Jerusalem al-Quds as “Israel’s undivided capital” and allowing the regime to annex settlements in the occupied West Bank and the Jordan Valley, among other controversial terms.

The move has since prompted much anger and protest across Palestine, with Israeli soldiers being attacked on numerous occasions amid protests in the West Bank.