Tehran 10 February _The impeachment trial of Donald Trump made it to the Oscars stage where Brad Pitt joked about how the US Senate voted against allowing witnesses during the trial, resulting in the president's acquittal. 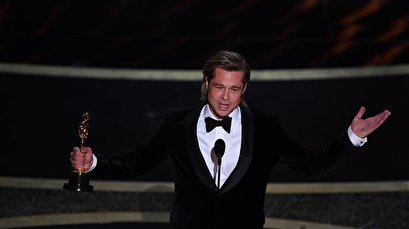 TEHRAN, Young Journalists Club(YJC)_The four-time Academy Award nominee won the best-supporting actor accolade for his role as a stuntman in Quentin Tarantino’s film, "Once Upon a Time in Hollywood." This marked the first time Pitt notched up an Academy Award win for acting.

During his acceptance speech, Pitt took a dig at the Senate vote last week, saying, "They told me I only had 45 seconds up here, which is 45 seconds more than the Senate gave John Bolton this week."

"I'm thinking maybe Quentin (Tarantino) does a movie about it and in the end the adults do the right thing."

Bolton, who was Trump's former national security adviser, had offered to testify, should the Senate subpoena him. Portions of his unpublished book manuscript, released days before the Senate was to vote on allowing witnesses, included his words that Trump ordered him to help pressure Ukraine to investigate the president's Democratic rivals.

The senate voted 49 – 51 not to allow subpoenas for witnesses and documents in the case. Two Republicans joined the Democrats in calling for witnesses at the trial.