Tehran 11 February _Iran's Foreign Minister Mohammad Javad Zarif and his Swedish counterpart Ann Linde have discussed the recent crash of a Ukrainian passenger plane in Tehran, which killed all the 176 people on board, including 10 Swedes. 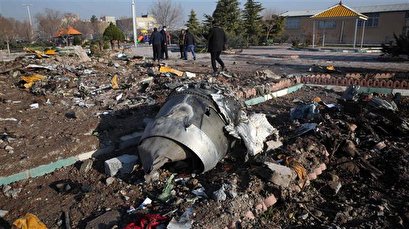 TEHRAN, Young Journalists Club(YJC)_The two sides discussed the issues relating to the January 8 downing of the Ukrainian plane in a telephone conversation on Monday evening.

In the phone call, the two sides emphasized the need for cooperation instead of politicization of the incident.

Earlier in the day, Iran’s top security official had urged that the IRGC's accidental downing of the plane should not be allowed to turn into a political controversy under the influence of some "spiteful elements."

Ukraine’s Boeing 737-800 was mistakenly shot down by the Iranian air defenses on January 8, when it was on its way to the Ukrainian capital from Tehran.

All the 176 people on board the plane operated by Ukraine International Airlines died in the incident, which came hours after Iran launched missile attacks on US military bases in neighboring Iraq. Most of the passengers on the plane were Iranians returning to Canada for either work or study after spending winter holidays in Iran.