Tehran 11 February _A sacred Native American burial site in the US state of Arizona has been destroyed by a construction company building President Donald Trump's controversial wall on the US-Mexico border. 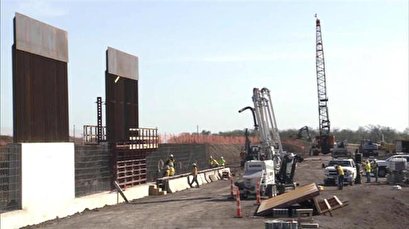 TEHRAN, Young Journalists Club(YJC)_A US lawmaker whose district includes the burial site said "controlled blasting" has begun at the site without consent from the Tohono O'odham, a Native American tribe whose ancestral land it affects.

"There has been no consultation with the nation," said Raúl Grijalva, a member of US House of Representatives who heads the chambers Committee on Natural Resources and whose district shares 400 miles (643 km) of border with Mexico.

"This administration is basically trampling on the tribe's history — and to put it poignantly, it's ancestry," he said.

The Congressman said the explosions are occurring on Monument Hill, a burial site located inside the Organ Pipe Cactus National Monument, a designated UNESCO Biosphere Reserve.

The US Customs and Border Protection agency, which is overseen by the Department of Homeland Security, told CBS News that the blasts are in preparation for "new border wall system construction.”

Grijalva said the border wall cannot be constructed on the Native American reservation because it is private land.

However, he said the burial site, which is adjacent to the Tohono Oʼodham Indian Reservation, is on public land, making it a target for destruction by the US government.

"What we saw on Monument Hill was opposing tribes who were respectfully laid to rest — that is the one being blasted with dynamite," Grijalva said.