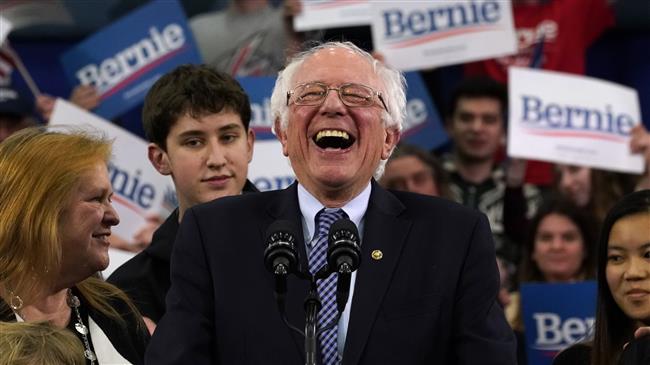 TEHRAN, Young Journalists Club(YJC)_Sanders got 25.8% of the vote, leading Pete Buttigieg, the former mayor of South Bend, Indiana, by 1.4 points with 84% of New Hampshire precincts reporting on Tuesday night.

"Tonight I want to take my opportunity to express my appreciation and respect for all of the candidates we ran against: Pete Buttigieg, Amy Klobuchar, Elizabeth Warren, Joe Biden, and what I can tell you, with absolute certainty and I know I speak for every one of the Democratic candidates is that no matter who wins, and we certainly hope it’s going to be us, we are going to unite together and we are going to defeat the most dangerous president in modern history."

Meanwhile, Buttigieg told his supporters in Nashua, New Hampshire, that he admired his competitor Sanders when he was in high school.

"I admired Sen. Sanders when I was a high school student. I respect him greatly to this day, and I congratulate him on his strong showing tonight.”

Senator Klobuchar, looking for a breakthrough after a strong debate performance on Friday, was in third with 20%. Warren was able to capture just 9.4 percent of the vote and Biden, the former vice president, took fifth in the early results with 8.5%.